FOURTH PLACE FOR MASSEI AT ASSEN

Fabio Massei had scored a well-deserved fourth place in this weekend’s second Superstock 1000 FIM Cup race at the TT Circuit of Assen in the north of the Netherlands. The race was red-flagged after different incidents in the first lap and also Massei was involved in one of these crashes but the Italian was able to return the EAB Racing Team Ducati in the pits just on time and was allowed to join the restart. In that second part of the race, Massei showed his talent and just missed the Dutch podium by less than two seconds. Tony Covena had a hard weekend in his and EAB Racing Team’s home race, but was still able to score three valuable points.

Fabio Massei: “What a race! When I crashed I thought it was over, but seconds later I saw a red flag and I knew I had still a change to join the restart. I decided to run with the bike all the way down from the Strubben to the box. Not the best way to prepare yourself for a restart, but I had no other option. To finish fourth after all these challenges is great, but I had the feeling that a podium was possible as we made a big improvement in the warming-up. The next race is on Imola, a track that suits my riding style very well. I want to say thanks to my crew as they did a perfect job with the set-up and of course after the crash!” 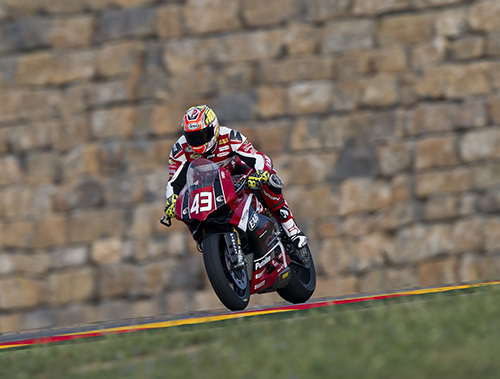 Tony Covena: “Three points after a hard weekend isn’t that bad to be honest. I don’t know why, but I’ve always difficult race weekends at my home track. After Aragon I was confident to score a top-10, but at least I’ve scored some points. In the warming-up we made a big improvement and that gives me a lot of confident for the next rounds. Unfortunately my first start was not so good and the red flag saved me at that moment. The second start of the day was much better, but it was a hard fight from eighth row of the grid. Next up is Imola, I’m ready for it!”