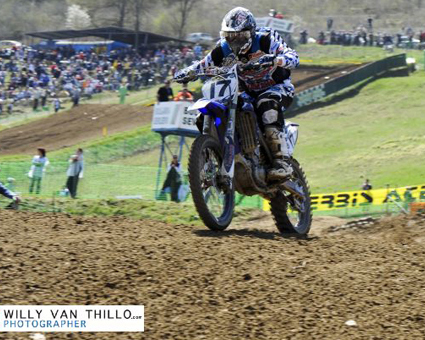 The Yamaha van Beers Racing Team is looking back to the second round of the World Championship Series in Mantova, Italy with mixed feelings. Ceriel Klein Kromhof withdrew from the GP of Lombardy after the first free practice session, after discovering that he had not yet fully recovered from the concussion that he had sustained at the Bulgarian GP the week before. The rider out of Daarlerveen, Holland suffered too much discomfort during the training session, and wisely decided to pack it in for the weekend.

Comments from Ceriel Klein Kromhof:’’I tried to ride but I couldn’t concentrate myself while I was riding. After several laps in free practice I decided to stop. The team and myself discussed the situation and we decided to sit out the Grand Prix. I hope to be fit again for the third round of the Dutch Open Championship Series in Gemert, which will be held next weekend’’.

Tom Soderstrom qualified himself in fourteenth position. This gave him confidence for the race on Sunday. In the first moto he took a decent start and went into the first corner in 15th position. He felt at home on the circuit of Mantova and worked himself up to 14th position. During the race he had several battles with his opponents and finally crossed the chequered flag in 16th position. With this position he scored five World Championship points.

In the second moto he started inside of the top twenty as well. He worked himself back up to 17th and was able to held on around this position till disaster struck the young Swedish rider. He crashed out of the race and went to the hospital for a check up.

Tom finished 20th overall in Mantova. After two rounds he sits in 20th position in the World Championship Series MX1.

Robin Bakens participated in the first round of the 125cc European Championship Series in Mantova. He qualified himself in 14th position in his group. On Sunday he finished the motos in 28th and 22nd position which wasn’t enough to score points for the championship.

Next outing for the Yamaha van Beers Racing Team will be the third round of the Dutch Open Championship Series at Gemert next weekend.