The SKS Polned TM Factory Team started the weekend with a lot of confidence on Saturday. Both riders felt at home during the practice sessions. Andrea set the fourteenth fastest time in the pre qualifying session and Nick set the seventeenth fastest time. In the qualifying heat Andrea had a lot of bad luck. He took a poor start and crashed later on in the race. During the crash he injured his right arm and back and was classified in 33rd position. Nick was riding a great qualifying heat and crossed the finish line in 17th position.

In the first moto it was Andrea who took a really good start and he came out of the first lap in twelfth position. In the beginning of the race he moved up to tenth position but a few laps later he dropped back to thirteenth position again. Andrea was riding in this position for a few laps when things went wrong for him. He crashed really hard in the wave section and was forced to retire from the race. Nick started the race around 25th position and changed places with the 23rd place rider in the first part of the race. In the second part of the moto he started to make the difference and passed several riders to finally finish the race in nineteenth position.

In the second moto it was Andrea again who took the best start and he came out of the first lap in 23rd position. He was riding in this position for a long time but unfortunately he got a lot of pain in his arm and back from his crash on Saturday and had to retire from the race. Nick made a crash during the first lap and lost a lot of time. He tried to come back but wasn’t able to close down the gap and finished the moto in 28th position.
Nick finished in 21st position overall and after his bad luck it was Andrea who ended the day in 32nd position. After fourteen rounds Andrea sits in 29th position in the championship and Nick is in 54th position in the championship. Next weekend the penultimate round of the series will be held in Faenza, Italy. 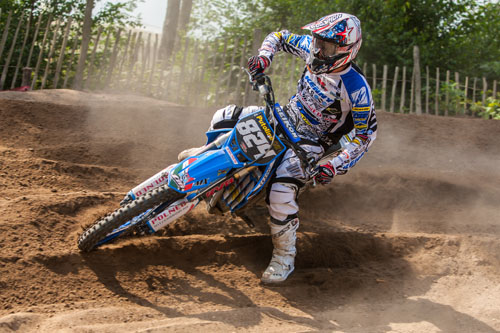