Desertmartin, 22-23rd June 2013. With Tanel Leok back from his recent injury, all the main contenders would be lining up at Desertmartin for the sixth round of the Championship. With rain forecast for pretty much the whole of Sunday it would be a testing time for all on the wet, sandy circuit.

Sterry made a good start in 5th but stalled his machine on the first lap and was left at the back of the field. After re-starting, he carved his way through the field in the early laps to move all the way through to 12th at the finish.

Sterry was away in eighth but a couple of mistakes left him down and after hitting a post with his right foot and twisting his ankle he was left to ride through the pain to eventually finish in 11th. With three back-to-back European rounds to deal with starting next weekend the decision was made to pull him out of the final race and save risking any further injury.

Karro carried on where he left off at the previous round as he took the hole-shot. Barragan made a bad start in 12th but was soon blasting his way through the field, swiftly moving through to 4th but as he passed the pits he was gesticulating that something was wrong with his bike and he was proved right as it expired on lap seven. Karro, meanwhile looked sublime as he controlled it from the front and took a magnificent win.

Karro took his fifth British Championship hole-shot on the bounce but this time out he had Leok on his tail and the two of them set a blistering pace as they battled for supremacy. Barragan started in eighth and swiftly moved through to third but it didn’t look like he would have any chance of progressing any further until two laps from the end when Leok pushed a little too hard in his pursuit of Karro and hit the deck. Barragan found himself on the rear wheel of the Estonian and flew past to take second, sixteen seconds behind Karro who took his second gate to flag win of the day.

Whatley took the hole-shot this time out with Karro in 4th just ahead of Barragan in 5th but the Spaniard hit a soft spot and went over the bars leaving him at the back of the field. Karro rode calmly and picked off the riders in front to move up to second where he gradually closed in on Whatley. Barragan hammered his way through the pack and remarkably moved all the way up to 4th by lap five but the gap to Leok in third was too big for him to have any realistic chance of improving any further and he had to settle for what he had.

Karro had rode patiently throughout the first half of the race but was now right on the rear wheel of Whatley and on lap seven he made his move and took the lead, however a mistake in the rollers at the back of the circuit handed it back to Whatley but Karro wasn’t finished and passed Whatley in exactly the same place as the previous lap to take over at the front again. He rode consistent laps to the end of the race to take his third win of the day and with it the overall from Leok in 2nd and Whatley in 3rd. Barragan had to be content with 7th overall which was enough to keep him in second in the Championship. Despite missing two rounds with injury, Karro has still managed to move up to 5th in the Championship and is just thirteen points behind Aubin in 4th.

Adam Sterry said: "I was really looking forward to Desertmartin as it’s one of my favourite tracks. Qualifying went okay and I made a good start in the first race but I stalled it and had to come from the back of the field. I got back to 12th which I was happy with, especially considering the conditions. In race two, I was going okay until I hit my foot on a post and twisted my ankle. I managed to finish in 11th but the ankle was pretty bad and we decided to sit out the last race and not risk any further damage ahead of the EMX250 race next weekend in Sweden."

Matiss Karro said: "I surprised myself today; I was pretty confident that I would do well but with the track so wet and with it raining all day it is easy to make a mistake and crash. But I rode really strong from the first race and with my Latvian fans cheering me on I ended with the perfect result."

Jonathan Barragan said: "The track was really good, but the weather was not so nice so it was tough conditions. I rode well but I lost points with the dnf."

Team Manager, Steve Turner concluded: “It was the perfect day for Matiss. He dominated the first two races and in the third race he showed great composure and control and didn’t just go crazy to get to the front straight away. Instead he took his time and thought about it before making his move. We’re not used to this from Matiss, I think I need to take him to see a doctor(!). No, seriously he is learning from some of his previous mistakes and is thinking a lot more about his riding. It was disappointing to have mechanical failure for Jonathan and instead of taking points off Whatley he’s now further behind in the Championship. He rode well in the next two races, especially the last one after crashing on the opening lap. Adam rode okay in the first two races but injured his ankle and we decided it would be best if he sat out the last one. He has three back-to-back European races starting next weekend in Sweden and we didn’t want to risk any further damage." 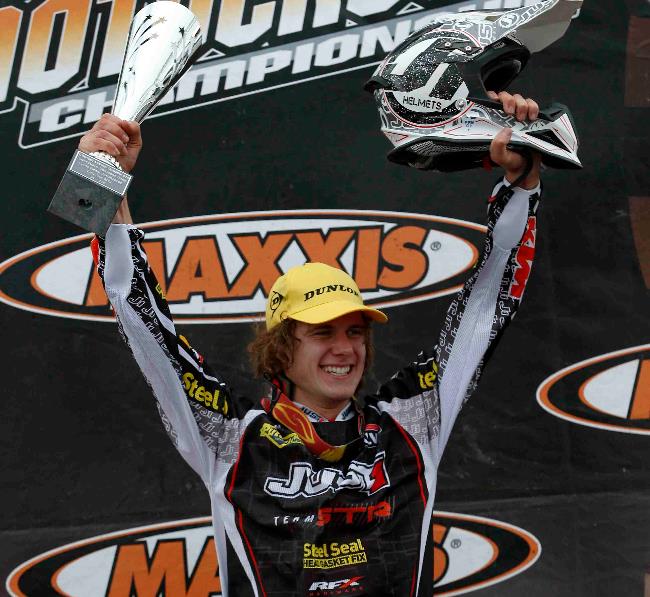