What a difference a week makes

Kegums, Latvia, 06-07 July 2013. The 11th round of the World Championship was in Matiss Karro's homeland of Latvia and expectations were obviously high for the crowd favourite. However with that expectation comes a fair amount of pressure adding another dimension to what is already a full-on weekend's racing. Adam Sterry was also in action alongside his two teammates in the fourth round of the EMX250 Championship, so the team was in for another busy weekend.

Karro gated in 13th with Barragan in 17th but a mid-race crash dropped Karro to 17th which he held to the finish. After a midweek practice crash, Barragan was finding the tough track hard-going but after initially dropping to 19th he rallied to finish in 18th

Barragan had a great jump but as he attempted to rail round the outside of the pack on the first corner, he ran out of track and had to back off and from looking like he was destined for a top ten start he was suddenly down in 26th. Karro chose to hug the inside around the first turn and it paid off as he came out in 9th. After losing out to Paulin and Searle, he settled into 11th and held off the advancing Simpson, Leok and Philippaerts for five laps until the Italian got the better of him. The constant defending seemed to have taken its toll and he lost his rhythm, eventually finishing in 16th. After initially gaining a couple of places Boog crashed right in front of the Spaniard taking him down in the process. After remounting in 25th, Barragan set about trying to rebuild his race and although he had some large gaps to overhaul, he managed to force his way through to 18th at the flag.

Both riders repeated their strategies for the start of race two and for Karro it was a similar outcome in 11th.  Barragan fared much better this time out and was right on the rear of his teammate in 12th. A rejuvenated Barragan managed to force his way past Karro and they were both promoted another place after Bobryshev departed with a hole in the radiator. A mistake by Barragan in the notorious wave section allowed Karro back through to 10th and the pair set about chasing Roelants. Nagl reeled in Barragan but he held his form and eventually pulled away from the German and as the race drew to a close, Karro was rewarded with his first top ten GP finish of the season, followed closely by a Barragan in 11th, giving them 13th and 14th overall.

Sterry started in 12th but lost a couple of places on the first lap and dropped to 14th. He soon gained the places back again but didn't look comfortable on the bike. After failing to qualify for the main race in Sweden he didn't want to make the same mistake again and was determined not to crash but this stopped him from relaxing on the bike and he struggled to find his usual smooth form, resulting in him losing the two places again. Although he was clearly struggling, he was able to hang on to the end and even gained another spot to secure 13th, giving him 25th gate pick for Sunday's race.

Sterry made a decent start but lost a number of positions after failing to clear the first jump, leaving him in 16th, however he looked like a different rider than on the previous day and made some hard passes to move through to 14th by mid-race. He had a bunch of four riders on his tail but he maintained his form throughout and saw off his challengers one by one to take a great 14th place finish.

Matiss Karro said:  “I found it hard on Saturday, I was a bit stressed with it being my home GP and I couldn't find any rhythm. I had dinner with my family and tried to focus on the track and the lines for the next day and was determined to do better. In the first race, again I couldn't find the rhythm and didn't have the speed. Even though I got a good start I lost places and finished 16th, which I wasn't happy with. In the second race I made another good start and this time I managed to find better lines and good rhythm for the whole race and ended up with 10th which was an awesome result for me and my fans. I have to say a big thank you to the team for helping me to deal with all the pressure and also to my Latvian fans who lost their voices shouting for me which helped to motivate me."

Jonathan Barragan said: "The weekend was much better, I was really happy with my bike and my mechanic did a good job for me. The starts were better and I had two good results with points in both. The first one I crashed into Boog when he fell off in front of me, so had to come from the back to 18th and the second one I made a good start and felt good on the bike. I passed Matiss to go into 10th but nearly crashed and he passed me back. We both rode a good race to the end and finished in good position. I will work hard and hope to get my confidence back so I can be in top ten again.”

Adam Sterry said: "I found the qualifying race really tough. I didn't want to crash and rode tense so didn't have any rhythm, but I managed to get 13th so it wasn't so bad. In the final I made a good start and felt really good on the bike. I was able to make some passes and was happy with the 13th place I finished with. I was happy with how I rode in that race and know if I can qualify better and give myself a decent gate pick, I will have a better chance of making a good start and if I do, I can run higher up in the field."

Team Manager, Steve Turner concluded: "After last week's demolition derby in Sweden we desperately needed a change of fortune and thankfully we got it. The mechanics worked like Trojans to repair the damaged bikes and each of them was rewarded with a trouble-free weekend and much improved results from their riders. Adam was worried about repeating his non-qualification the week before and it showed as he rode really stiff in his heat, but in the final he looked like himself and bagged a great result. Matiss was pretty stressed throughout the weekend as he felt the pressure of meeting the expectation of his fans and it showed in the first race, but he managed to relax more in the second and took a great 10th place.

“Jonathan looked so much sharper out of the gate and in the second race he had a gate to battle with Matiss and rode away from the likes of Nagl, Philippaerts, Boog and Leok. I really hope this jump-starts his season." 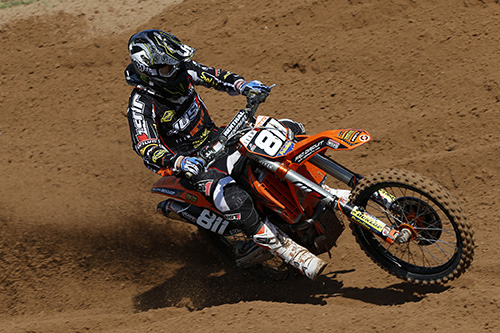