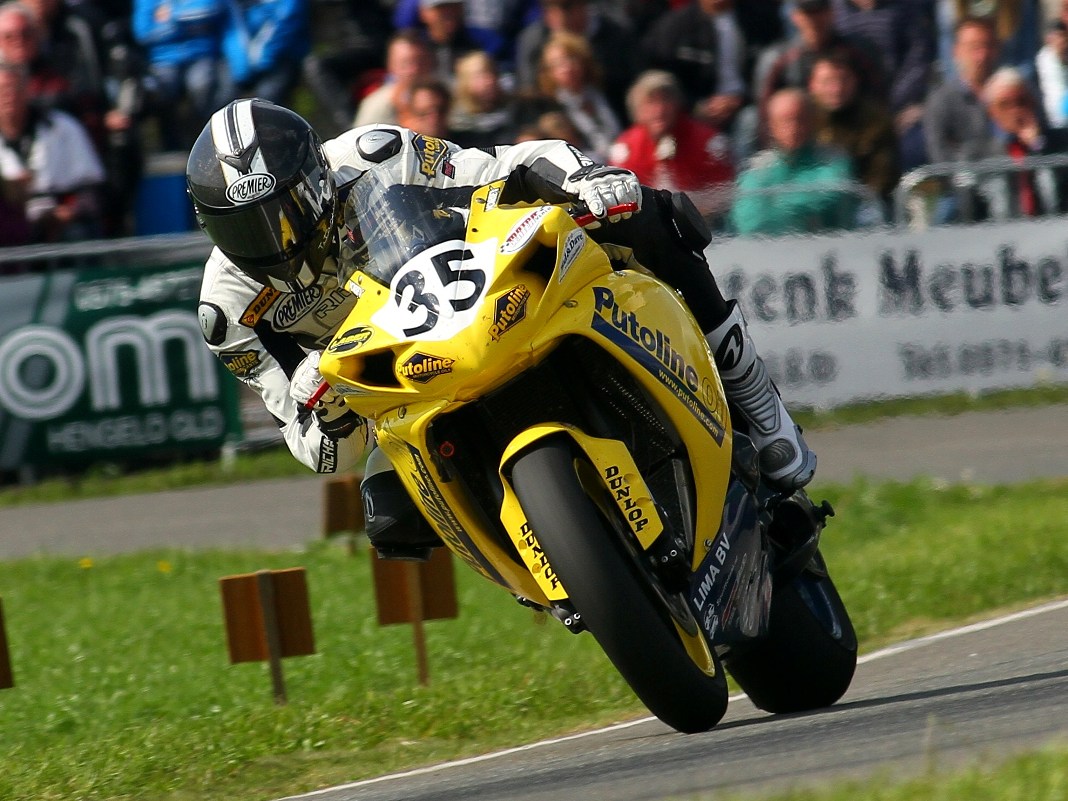 Team Putoline Oil Racing left home very confident for the next round at Hengelo. Allard felt immediately pretty good going round the street circuit. He was a bit disappointed with a 6th starting position. Allard lost 1 spot in the first corner but fought back to the 4th position. In the last laps he started to battle for the 3rd position with the championship leader Arie Vos. This battle continued until they both ended up in the grass at the last corner. Unfortunately Allard crashed, but he managed to push his bike over the finish line and scored a 13th position.

The free practices before the weekend were scheduled on Thursday. The team was able to find the right setup and tire compounds. Ready for qualifying.
Saturday morning during qualifying 1, Allard was immediately faster then in free practice. He ended up at a 4th position, but he was sure he could be faster in the next qualification. In the second qualification he went faster again, but so did the other riders. Allard went backwards 2 places. Because the track is very narrow, there are 3 riders on the front row - 2 on the second – 3 on the third row. That’s why Allard had to start from the 3rd row. He was still confident he could score a good result during the race.

Some slight changes were made to the bike before the warm-up on Sunday morning. Along the track there were many spectators. Also the awning of Team Putoline Oil Racing was pretty crowdy, with many fans and sponsors.
About 3:30 the race started. Allard got away well and went true the first corner. Coming out of the corner he was pushed back to 7th. But in the same lap Allard could gain 2 places to pass start finish in 5th position.
Unfortunately the race was stopped because of a red flag situation.

The restart of the race was shortened to 9 laps. Again Allard got away well and halfway the first lap he was in 7th position. Slowly he was able to fight his way forward. When he was 4th, the leading pack was just to far away to close the gap. But Arie Vos made a mistake and Allard was able to overtake him. The final laps were very exciting. The riders kept on battling for that final podium position. In the last lap Allard could overtake Arie on the outside. Arie passed him again on the straight, but he went too fast into the penultimate corner. So Allard got on the outside of Arie before the last corner. Allard knew he could outbrake his rival. Arie let go his brakes, his bike got out of balance and he had to go straight. Allard had no choice and missed the corner as well. By getting back on the tarmac Allard went too fast on the throttle and got thrown of his bike.

He ran to his bike, picked it up but he couldn’t start the engine. As fast as he could he pushed his bike to the finish line. The audience supported him by clapping and screaming and Allard still finished in 13th position.

Although everyone regretted the facted he crashed, Allard was welcomed as a hero and showed how strong he is!
Everyone is already looking forward to the following round next week at another street circuit.