After two strong street course races at Oss and Hengelo the racing circus returned to Assen. Finding a good setup was hard this weekend. With a tenth qualification position Allard wasn’t satisfied. He started his race very good en went as sixth into the first corner. Unfortunately he dropped back to ninth position. With obvious grip problems Allard was able to bring the bike in ninth position over the finish.

During the last two events at the street courses of Hengelo and Oss, Allard put down some very good races. With a lot of confidence Allard and team went to Assen. On Friday the hospitality was build op close to track.

Saturday morning during the first qualification Allard nicely build up his lap times. Despite some changes Allard kept having grip problems. After some major changes to the rear suspension he went quicker in the second qualification. But he was caught-up in the last laps with some slow riders, which cost him his last four laps. The rest of riders didn’t wait for Allard and he dropped a position and had a 10th starting position for the race on Sunday.

During the warm-up practice on Sunday morning Allard tested with different suspension setup. In these 10 minutes Allard enjoyed himself. Afterwards the bike was prepared for the race. From the rooftop of the team truck we were following the races till at 15.45 the Dutch Superbike race started.

When the red starting light went out Allard made again a very good start. He took sixth position going into the first corner. Till the last corner of the first lap he could keep up this position, but the worse started riders were catching him up. For a few laps he was able to closely follow the riders in front and went almost a second under his qualification time. But again a shortage of grip made it impossible to keep up. Allard had problems getting the power down, putting some big black rubber lines on the tarmac, but it didn’t gain much speed. Probably a wrong type of rear tire was used. At the end Allard finished quite lonely in ninth position.

After the race Allard gets to know he has to take part in a doping control together with another rider. After a heavy race which costs a lot of sweat, Allard finds out it is very hard to fill a cup with urine. When Allard returned most of the sponsors and fans already left.

But still Allard scored a few nice points and climbs up to the fourth position in the Championship. The whole team is already looking forward to the next race at the German track of Oschersleben. On July the fourth there will be a double race held at this track. 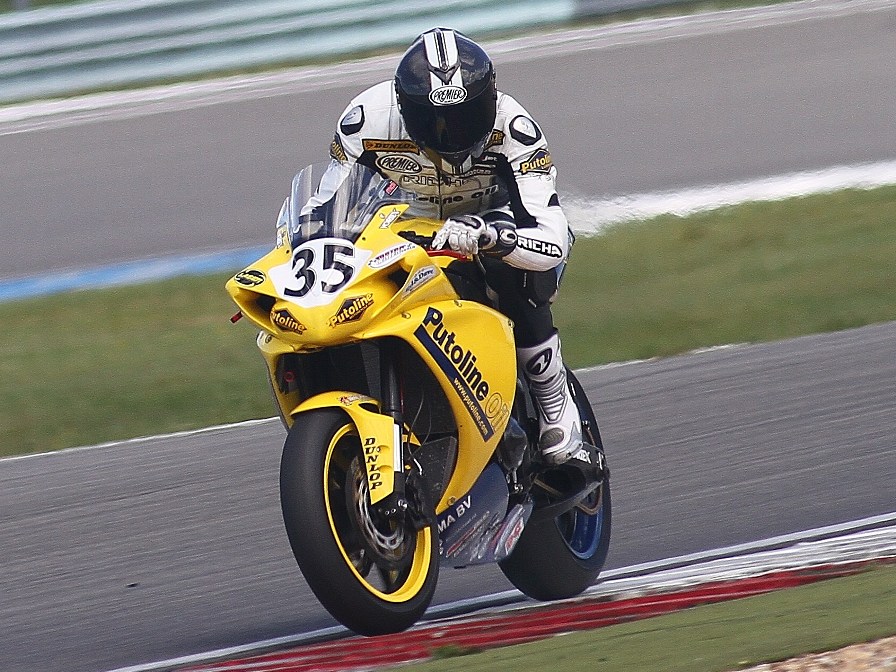