Also this year Allard and team were present with the Rizla Racing Days at Assen. With many top competitors from the IDM series it was going to be a though weekend. First qualification was wet. Allard really needed to get used to the wet conditions but still ended up in 15th position. Before the second qualification the track was dry again. Allard started good, but it didn’t go like he hoped. He qualified in 17th position. On Sunday everything went much better. After a perfect start Allard battled almost the whole race for 11th position, which he won. After the race 6 IDM riders pulled themselves back and Allard received 11 points for the 5th position. 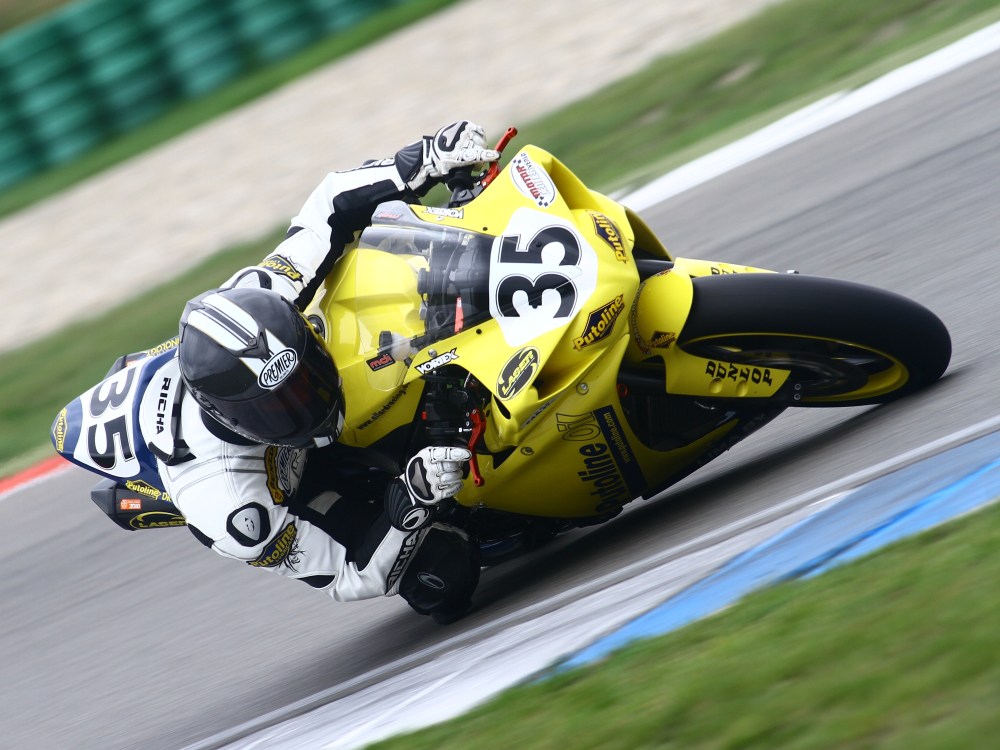 
The Scania team truck first went to Boonstra Transport for the yearly check-up before going to the track on Friday. Both qualifications were quickly behind each other, because the track had to be prepared for the car races in the afternoon. That’s why everything had to be ready for both qualifications. The planning got interrupted when it started raining before first qualification.

It was more then a year ago that Allard rode in wet conditions. It took him a few laps to get used to it again, but every lap he improved in lap times and position. With a 15th position everybody was satisfied. Before the second qualification the track dried. Allard was the first rider who went on track. This gave him some open track in front of him for some laps. His lap times were fast from the beginning. In an attempt to go faster the setup of the bike was changed. But from that point Allard didn’t get friends with the bike. Also the switch to a different type of rear tire wasn’t the right choice. He dropped back to the 17th position. Allard wasn’t happy, but was confident that he could show more during the race.

On Sunday the Dutch Superbike race started at 11.30. It was good to see from the starting grid that the main grandstand was filled with people. Crowds were spread everywhere around the track. From the fifth start row Allard made a perfect start. At the first corner he took the outside line and could make up some more places. He went on to the back straight in 11th position. In the first lap he lost some places to badly started IDM top riders. From the beginning he was close to the number three from the Dutch Championship, Bob Withag. Both were overtaken by Bas Winkel and Danny de Boer. But after a few laps both were caught back again. Allard kept on stalking Bob, but he could make a tough and successful overtake between the double right corners at the most southern point of the track. On the finish line he even had a small gap on his followers. With 11th position he was very happy. Specially with the best permanent Dutch Superbike rider finishing in 8th position.

With technical control after the race most IDM teams pulled themselves back. With this decision Allard was positioned 5th on the official results, taking 11 points. With this final result Allard moved up a spot at the championship standings going to the fifth position.

Having a good feeling the Putoline Oil Racing Team went back home. Everyone is having a good feeling about the next races at Spa-Francorchamps this weekend. On this Belgium track there will be a double Dutch Superbike race. Allard tested here one day last week, so he is ready and confident about the races.