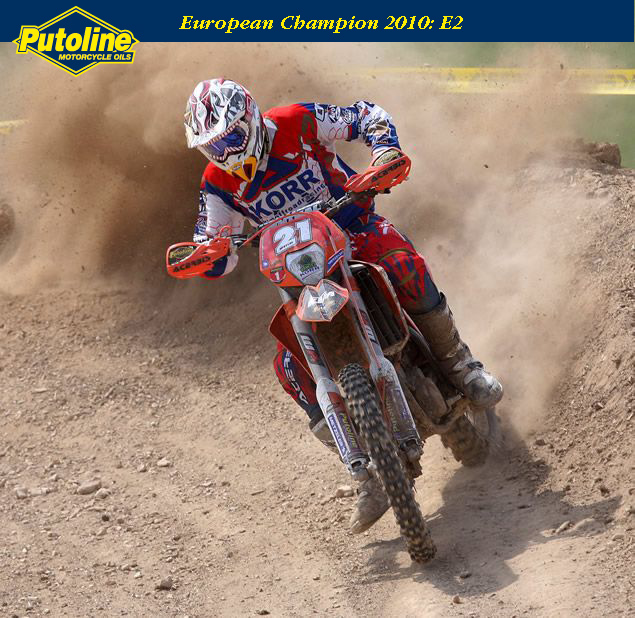 
Greg recovering from a leg injury sustained at the recent BEC round completed the final 3 days of the UEM championship in Oliveira Do Hospital of Portugal, an area where many WEC event have been organised and certainly a region which makes very challenging Enduro's. Greg riding below his best having been off the bike for a few weeks did enough to take the championship which he has lead all year, but narrowly missed out on the overall European championship by a few points to a Portuguese rider. The third day of the event was to be an MX, similar format to 6 days, but because of Dust it was decided to make the track into a special test and just make 1 practice lap and 1 timed lap. The overall European championship difference was decided in the last test by only 2 seconds !!! . The event was dominated by the home riders who obviously had great confidence in this region and conditions, Greg had some great times on the extreme test and MX but was loosing time on the long cross country tests to the locals.

“Of course I am really pleased to have won the E2 championship but a little disappointed to have only just missed out on the overall, the event was really tough and I just did not feel at my best. With missing a few weeks training and riding in conditions unfamiliar to me I just could not match the pace of the locals this week. But my bike ran great and I would like to thank KTM and all our KORR Team sponsors who have helped me this season”.


Next Event: BEC Rd6, Natterjack September 25/26
The Team now prepares for final BEC round in 2 weeks, Daryl Bolter is leading E1 class, Greg after a recent accident and DNF through injury at Rd5 of the BEC is 2nd in E2 class and Junior rider and recent D2D overall and 24hour winner James Giddings leads the Expert E1 class.