Great 5th position for Allard in the ONK final score 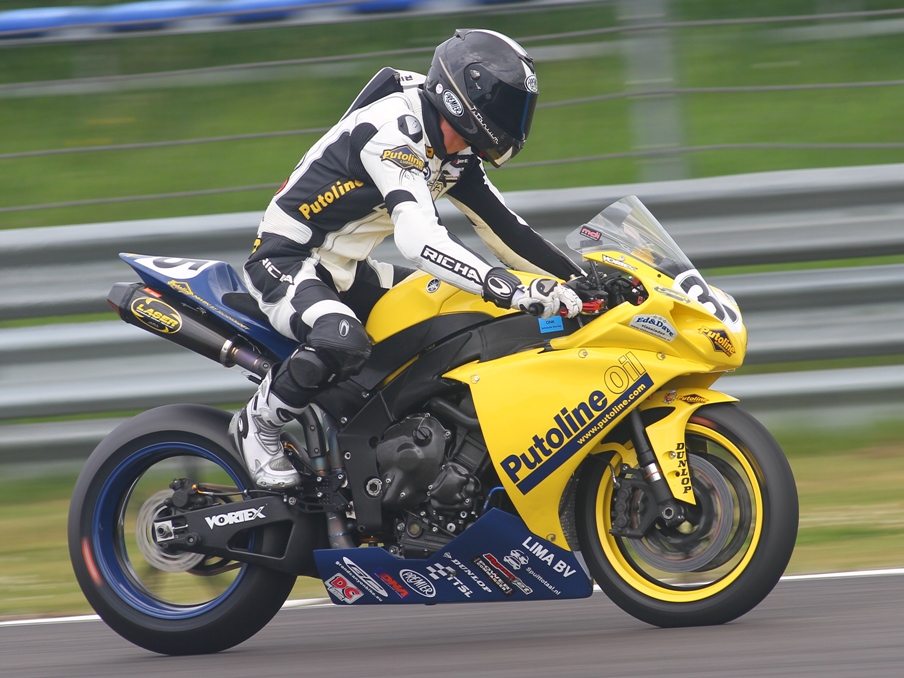 Last Sunday, it was time for the final ONK race of the season at Assen. During this double race, Allard’s target was to retain his position in the top five. Things went a little wrong in the first qualification, when Allard took a tumble. The second qualification was a washout. And so Allard started the races from 9th position on Sunday. On a wet track, Allard managed to achieve 12th position in the first race. In race number two, the motorbike was not Allard’s best friend, and he had to make do with 13th position. This did however guarantee him 5th place in the ONK final score. And so the 2010 target had been achieved.

The last race of the season. Once again, the SMA (Assen road racing foundation) to organise the Race of the Champions at Assen. This time around, the Dutch Superbike even had a double race.

The first qualification was not until Sunday at 12.30 hours. Allard was back in the pits within a few rounds, because somebody had forgotten to fit the transponder to the bike. They fitted a new rear tyre at the same time. Although the track was not particularly busy, Allard was held up by a slow rider in nearly every lap. With only a minute on the clock, he made an extra effort to establish a quick round time. He accelerating a little earlier all round, just a little bit more fanatically, but things turned sour as he headed into the Ramshoek. Allard went into the bend too quickly and slid out the front at a speed of around 180 km/h. Although he came out the crash unscathed, the motorbike was less fortunate.
We were allowed to present the other bike for inspection for the second session. A number of parts were transferred and Allard was back in the saddle. The session started off really well but it began raining after only three rounds. There was no point in continuing, as the track was not entirely wet. And so Allard retained his 9th position of the first qualification.
There was little work to be done on the bike before the warming up training on Sunday morning. The hospitality tent started to fill up nicely from eleven o’clock onwards and it was great fun. The Dutch Superbike had another warming up training just before midday.

After the warming up training, there was time to fry up some delicious pancakes and to prepare the bike for the race. The first Superbike race started at 14.45 hours on a wet but slowly drying track. Allard started off well once again, though he lost a number of positions following a couple of hairy moments early in the race. He eventually finished in 12th position, luckily leaving his main competitors, Bas Winkel and Peter Politiek, behind him. Allard was now in joint 4th position in the championship with Peter Politiek, and was most certainly ready for the second race.

This second race was driven on a dry track. Allard started well and immediately moved up a couple of places. Although he was confident beforehand, he was surprised by a number of overtaking manoeuvres. The round times became faster but he struggled more and more as the race progressed. The bike hadn’t been adjusted well enough to ride any faster and he dropped back to 13th position.

It was enough to end up in 5th position however. And so the 2010 target had been achieved! And so Allard has been invited by the KNMV to compete in the EC Superstock 1000 finals at the Albacete circuit in Spain. We’re now working hard at making that financially viable, with a view to the effect of Saturday's crash on our budget.

We'd like to take advantage of this opportunity to thank everyone for their support during the 2010 season. We’ll let you know about our 2011 plans as soon as possible.