Sidecar MotoCross of European Nations in Sverepec Slovakia, September 25 and 26. 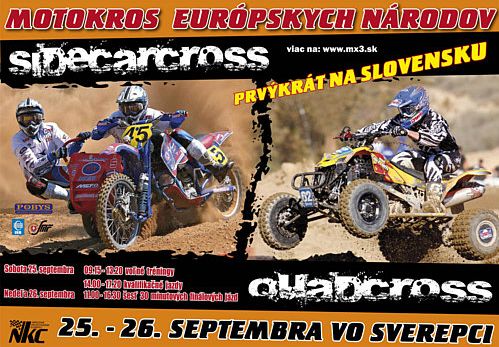 Gertie Eggink was still suffering the effects of his fall from the ladder and Dagwin Sabbe still needed time to recover from his injury, and so Daniël once again had to find a replacement passenger. This time around, Frenchman Guennady Auvray took his place in the sidecar, which is not a new phenomenon in the cross world because he's regularly ridden with Dutch sidecar riders, including Marcel Willemsen. Daniël admitted that they had acclimatise to each other but Guennady coped very well and did exactly what was expected of him.

Qualifying races were held on Saturday 25th September, with Willemsen-Auvray in Group A, Bax-v.d.Bogaard in Group B and Jan and Jeroen Visscher in Group C.
The teams performed well and therefore earned themselves good starting places on Sunday's grid.

The frequent rain showers had really made a mess of the track, but the races were started anyway. Willemsen had the head start but became stuck along with one of the back markers in the mud after a few rounds. It took them quite some effort to get going again, but one team after another became bogged down in the mud. In the end, the Willemsen team and Bax team were the only ones left in the race, and they had to continue as long as they weren't flagged, as that was the only way to win any points. The leg had already been shortened to 20 minutes, and they were indeed the only ones to finish this leg.

And so the organisation decided to cancel the rest of the races and to use the points won in the qualifiers on Saturday, which gave the following results:

There will not be a second chance or an alternative for the legs not raced. Our teams: Willemsen/Bax and Visscher once again performed brilliantly and have earned yet another Gold Medal.