On the 10th of December 2012, Allard Kerkhoven signed for the Putoline Oil colors again! The Oil Brand and the rider renewed their coöperation and this means that 2013 will be the fourth year in a row where Allard will ride in yellow/blue in the Dutch Superbikes. Next to this, the team has chosen to use the Kawasaki ZX10-R as its weapon next season. Together with Dunlop tires it looks like the best choice.

Ever since Allard started racing, every bike he used was lubricated with Putoline Oil. With the oil brand, which focusses entirely on the motorcycle market, he had many successes over the years. Both parties are always trying to improve, reason why they like to commit to each other for another year. Two years ago, Allard started riding with a Kawasaki and in the past years the ZX10-R was improved step by step. 2012 became the best season ever, finishing fourth overall in the Dutch Superbike Championship. During these two seasons, there were no mechanical at all, thanks to the Putoline Oil Nano Tech lubrication. This gives confidence for the future.

Although the racing season is over, the team is not relaxing. During the winter period, the bikes are being improved; more horsepower, less weight, better braking performance, gaining more corner speed; everything to make fighting for the rostrum places in 2013 possible.

Next to running and mountain biking, Allard found a new hobby to get in even better shape, grow more muscles and get more control over his bike. And it is fun too! He bought a 450cc motocross bike, which of course also is a Kawasaki lubricated with Putoline Oil. At this moment you can find Allard playing somewhere in the sand every weekend.

Allard: “I’m really happy that coming season I will ride in the Putoline Oil colors again. It is nice to work with people at Putoline Oil and I’m proud that they promote their name through our team and me. However, I still have to wait some months before I can play outside with the Putoline Oil – Kawasaki delivered by dealer Hans van Wijk Motoren.“ 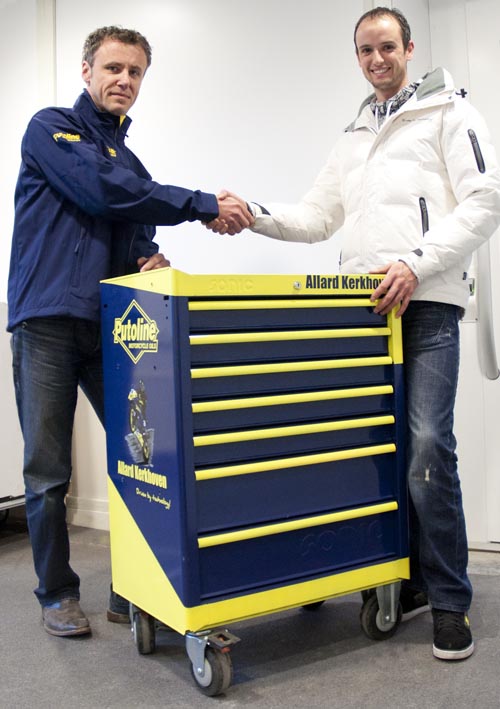