It was a double race on the Assen speedway for Racing Team Oliveira. Not only did the ONK Superbike get a ride, but the team also played a wildcard in the FIM Cup Superstock 1000. After some small modifications to the engine, the training sessions started on Friday. On Saturday Allard placed 25th for the race, his time resulting in ninth position for the ONK race. On Sunday morning, Allard rode a great race and finished in 18th place, just a few seconds out of the points. At the end of the day he finished 7th in the ONK, which puts him just two places from a podium finish. 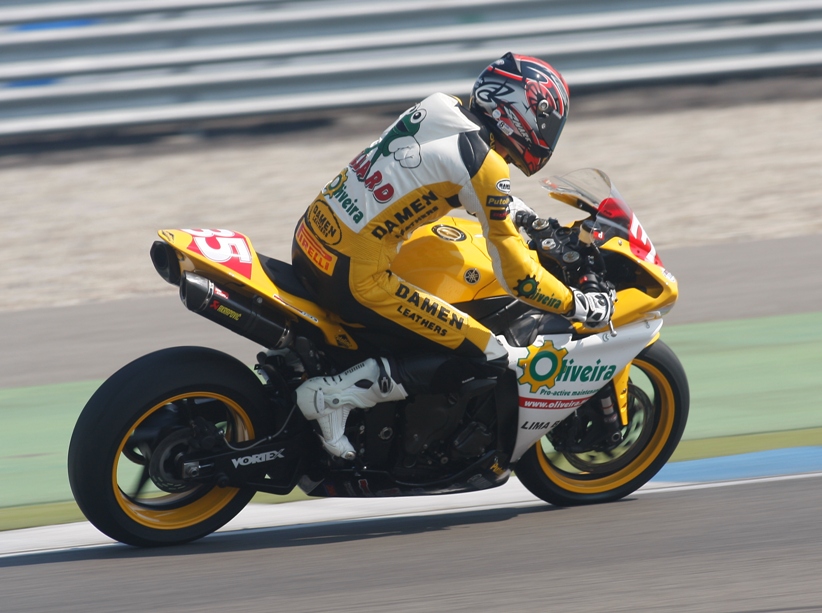 Thursday morning saw us all making our way to Assen once again. Luckily we were able to pick up the second Yamaha R1 from Motor Center Venlo on Tuesday, so we were fully prepared in terms of back-up. At the same time, the racing motor was on display at the Oliveira stand at the Industrial Maintenance trade fair, where it drew many an admiring glance. Other news this week is that Lima BV of Wijchen is prepared to act as event sponsor for the FIM Cup Superstock 1000 race. As a result of participating in this race no training could be undertaken for the Dutch Superbike races, but the qualification time did count.

On Friday there was a free training session, and Allard took the opportunity to get used to the Pirelli tyres that are compulsory in this class. Another free training session on Saturday morning saw Allard improve his time considerably, reaching 19th place out of a team of 40 young bikers from across Europe. Unfortunately the progress did not continue during the qualifying session on Saturday afternoon, and Allard did not get higher than 25th place.

The race started at 10:40 on Sunday morning after a short warm-up session. Allard did not get a perfect start, but still managed to move up two positions on the first lap. After that he commenced battle with two other Yamaha riders, bettering both of them. One of the riders shadowed Allard for the rest of the race.
Reaching 18th place, he started to gain ground on the group fighting for 14th place, but the finish line arrived just too early.

After a day of spectacular races, the Dutch SBK had a brief warm-up session just before the race started. Allard started excellently from 9th place, and he’d made it through to 5th by the first bend. The first two bikers broke away, but Allard stayed well within reach of the 3rd and 4th placed riders. But he was overtaken twice in lap four, and a few laps later he just couldn’t find the acceleration and slid back somewhat. A few seconds ahead of him, battle was being waged for the final podium place. By the end of the race Allard managed to get his speed up and gained on the group once more. But it was just not enough to join in the fight. On the final lap he was even 0.6 seconds faster than everyone else on the track!

“It was a great day! First the very good race in the FIM Cup, where I was very close to the points. Number 11 was just five seconds ahead of me! The Dutch Superbike race was also great. It’s a pity that I suddenly lost my confidence halfway through, but fortunately I managed to build it up again towards the end. I’m very happy with the shared 4th place in the ONK. It was an excellent weekend for the whole team!” This was what a satisfied Allard had to say at the conclusion of the second race at Assen.