Up and Down Weekend at Valkenswaard

Valkenswaard in the Netherlands was the venue for the 3rd round of the World Championship and the Team STR KTM team was looking forward to having both riders on the line for the first time after Karro had been given the green light to return to racing. The weather was cold and the track was unusually hard underneath, creating a different challenge than the riders have come to expect at the famous venue. The organisers decided to run the track in reverse this year which was also something new for the riders and spectators to get used to.


With the track being so hard underneath it didn’t rough up as much as usual and so was fairly flat and very fast, which meant that the start would be crucial and from their gate picks they would be lucky to get a good one. So it proved as they were both just inside the top twenty. Barragan pushed on for 14th and Karro finished 18th.


Once again a good start eluded them with Karro in 17th and Barragan in 19th. Barragan had a good first lap and came past the pitbox in 13th but Karro stalled his machine and came through dead last. Barragan struggled to make any progress but Karro pushed hard and was soon through to 17th, but his lack of bike time was beginning to show and he had to back off to conserve energy. After dropping back to 20th he bided his time until late in the race and then pushed again to end the race in a hard-earned 18th. Barragan, still in 13th, also started to push towards the end and suddenly found Simpson in his sights but as he tried to make a pass Simpson made a mistake and Barragan ran into him and went down himself which meant that instead of gaining a place he ended up losing three, finally finishing in a disappointing 16th. 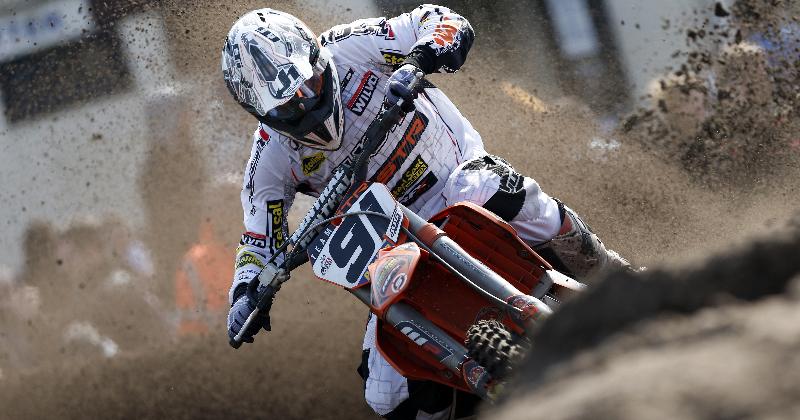 
Both riders were away slightly better in the second race with Karro again just ahead of his teammate but as in the first race, Barragan had the better first lap and crossed the line just ahead of Karro. On the fourth lap Barragan suddenly stopped when his back wheel locked up and that was the end of his race. Karro was in 19th and although riding hard, was not allowing himself to get carried away and risk tiring himself out too much.  This approach paid dividends as he was able to gradually improve his position to eventually finish in a somewhat unexpected 14th.

Barragan said: “I rode okay in the first race and pushed at the end to close in on Simpson for 12th but Simpson made a mistake and nearly crashed and I hit him and went down so only ended up in 16th. The second race my back wheel locked up and I couldn’t move the bike. I have some hard pack tracks coming up at Italy and Bulgaria and I’m looking to get some better results at those and then build from there.”

Karro said: “First race I wasn’t that happy with 18th but I know I rode good and second race I didn’t ride as well but ended up with a better result in 14th. Overall I achieved my goal of finishing both races in the points and with no crashes. So I’m happy and can move forward from here in the next few races.”

Team Manager, Steve Turner commented: “Bit of an up and down weekend really. Jonathan was pretty good in the first race but was a bit unlucky to come together with Simpson when he was trying to make a pass; could have been 12th but ended up with 16th.

"Matiss did better than I thought after having so little preparation beforehand. He rode sensibly and didn’t risk too much but at the same time always pushed. Second race was a shame for Jonathan as he ended up not finishing through no fault of his own. Matiss stayed strong again and was rewarded with 14th which is definitely better than we could have wished for.

"It’s such a hard physically demanding track when you’re fully fit so to finish so well with such little bike time is impressive.”
Facebook