After the early season wind, rain and snow, it was a pleasant surprise to arrive at the Cadders Hill circuit in Lyng and be greeted by bright sunshine.

MX2. Sterry set the 5th quickest time in the timed session, but a couple of small mistakes dropped him down to 9th in the super-pole.
MX1. Karro continued his quick-fire return to racing by posting 3rd fastest in the super-pole with Barragan in 8th.

Sterry made a decent jump but as they headed down the start straight another rider veered across and took himself, Sterry and three others down. Starting at the back Sterry soon caught up to the pack but after progressing to 20th he dropped it, relegating himself to 26th at the finish.

Karro made a good start in 5th with Barragan in 10th. By the time Karro moved up a place to 4th, Barragan was up to 6th and pushing for 5th but was taken down, dropping him out of the top twenty. With the track so fast in the early part of the day, it was hard to make up places and the best he could manage was 13th at the flag. Karro pushed past Dougan to move into 3rd which he held to the end of the race.

Sterry made a good start and finished the first lap in 5th. After losing a couple of places he settled into 8th and managed to fight off some determined opposition to keep the position.

Karro made another good start in 3rd behind Leok and Searle and although he couldn't live with their pace, his own speed saw him move away from the rest to another 3rd. Barragan started in 13th and soon moved through to 7th but a crash late on cost him a place and he had to settle for an eventual 8th.

Sterry didn't get a good start away from the line in race three and was down in 13th. With the track now extremely rough, he had a strong race to finish in 10th for 11th overall. He now sits 9th in the Championship.

The first three from race two were again away at the head of the field but this time out, Karro was able to go with the front two. The three of them quickly pulled away from the rest of the pack and it was a three horse race for the podium positions. Try as he might, his lack of bike time meant he couldn't sustain the early pace and Karro had to ease off and was left to ride a lonely race which he easily held until the end, to give him a fantastic 3rd overall on the day. Barragan was forced to sit out the final race after suffering double vision following his race two crash.

Adam Sterry said, "Qualifying was good; happy with 9th. In the first race I got taken down on the start and hurt my wrist and two more crashes dropped me out of the points. Race two, I made a good start and rode well to finish in 7th. Race three, I made an average start but came together with another bike and lost a few places. I made some passes and finished 10th so after the first race I was happy with my other two race finishes.”

Matiss Karro said: "It was good weekend, third place today felt like a win because of being injured before. I got arm pump in the first race but still finished third. Then I was 3rd again in the second race, but got tired and had to fight to keep the position.

“In the third race I managed to stay with the front two for a while but add a couple of mistakes and I lost the tow, so just settled for a safe third. Bike was good today and I felt good, so looking forward to the GP in Italy next week."

Jonathan Barragan said: "It was a disaster today. I got taken out in race one, crashed myself in race two and then wasn't able to ride in race three because I couldn't see properly."

Team Manager, Steve Turner, "It was a great day for Matiss, not so good for Adam and a disaster for Jonathan. Matiss rode fantastically well considering his lack of training and race time. Adam was unlucky in the first race and rode well in the other two. After being taken out in race one, and crashing himself in race two Jonathan was struggling to see properly and was unable to contest the third one. Jonathan is now in 5th in the Championship, with Matiss already up to 9th. Adam also sits in 9th in the MX2 Championship. 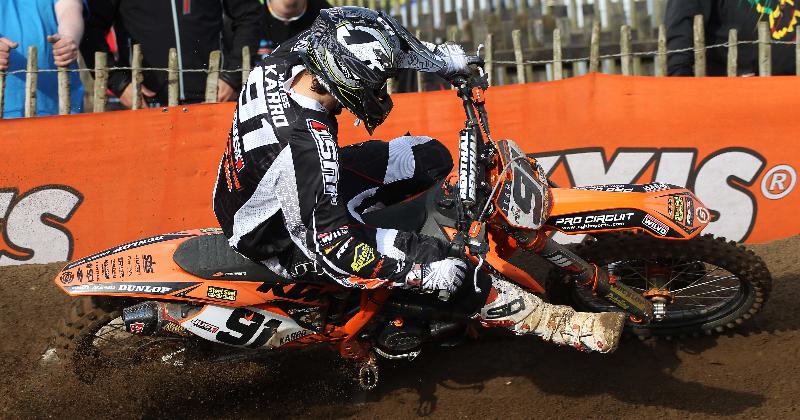