Top Ten for Barragan in Italy

Sunday, 14 April 2013. The beautiful area of Arco di Trento, 30 kilometres north of Lake Garda was the venue for the fourth round of the World Championship and with glorious sunshine forecast for the weekend, the team was hoping that the results would match the wonderful setting. Karro was aiming to build on his two impressive rides since his return from injury and Barragan was looking to kick-start his season on a track which should be to his liking.

Karro made a good start from the outside and was around the first corner in the top six but somebody stuck their foot in his front wheel as they exited the corner and he hit the deck, dropping him to the back of the field. Barragan was away in mid-pack and after the initial melee of the first few laps, he settled into a comfortable 13th, however as the race entered the latter stages, his bike developed a mechanical issue and he was forced out. Karro rode a strong race, pushing his way further and further forward and a pass on Goncalves on the penultimate lap gave him a good 13th place finish.

Karro took an inside gate for the start and was right in the thick of it from the off, completing the first lap in 12th. He spent the whole race battling to preserve his position, fluctuating from 11th to 13th but in the end he was able to bring it home in an impressive 12th. Barragan chose an outside gate and got squeezed out on the end of the start straight, leaving him in 17th. He battled throughout the race and made it through to 14th before closing in on Goncalves and after initially struggling to pass the Portuguese rider he eventually  managed to force his way through to secure 13th at the finish.

Karro chose the very inside gate form race two and Barragan slotted in a few places away in gate six and it paid-off as they both made superb starts with Barragan in 5th and Karro in 8th. Barragan soon moved into 4th and Karro up to 6th but he struggled to find a way past Goncalves and as the laps ticked by, the pack closed in. With so many of the best riders behind them it was a case of trying to establish as good an early position as possible in readiness for the obvious onslaught. Barragan fought to pass Boog for third but instead lost a place to Nagl.  Karro held 5th briefly after eventually forcing his way past Goncalves but was soon forced to give ground to Paulin, Stribos and Searle.

Barragan also found himself being mugged by the same trio but the two riders fought to the very end to finish in 9th and 11th respectively.   Barragan took 10th overall on the day with Karro one point behind in 11th.

Barragan said: “I wasn’t happy with my first race but I got a good start in the second and it’s much easier running near the front. My speed was good for the first half of the race but I didn’t have such good lines in the second half and lost a little bit of my pace which cost me some places. I’m much happier with my results today, especially getting back into the top ten.”

Karro said: “It’s been a difficult week for me preparing for this GP. I haven’t had any hard pack practice and tried to get on the Genk track but it was shut so I only managed to practice on sand at Lommel. My bike fitness still isn’t there but I got awesome starts and managed to hang on in both races. The track was really grippy in some places and really slippery in others and physically it was very hard but I’m happy how I rode considering it was my first time on hard pack this season. I will be fitter next week and I hope I can do even better.”

Team Manager, Steve Turner commented: “The boys did okay today. Jonathan struggled in the first race but after getting a good start in the second, he showed he still has the speed and just needs to maintain it until the very end. It’s the first time he has run near the front for a while and he will gain confidence from that race and hopefully take it forward to the next one in Bulgaria. Matiss rode a strong first race and in a similar vain to Jonathan showed he has the pace to run at the sharp end if he gets the opportunity. It’s only his second GP since his injury so he has to be happy with his riding and his overall points haul.” 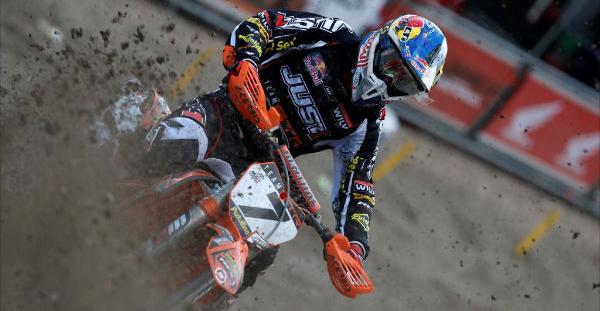