Sevlievo, Bulgaria. Sunday 21st April 2013. After the satisfactory performances in Italy, the team left the beautiful Trentino region with renewed vigour and after driving down to the south of the country, they caught the ferry to Greece and continued through to Bulgaria on their way to the self-proclaimed ‘best track in the world’ in the small area of Sevlievo. Both riders have previously found the track to their liking, in particular Barragan, who has taken three previous podiums at the hard-pack, hill-side circuit. Karro was hoping for better luck than he had encountered in the previous two seasons after breaking his ankle in 2011 and knocking himself out in 2012, on both occasions when in great positions and with only two laps remaining.

Barragan made a good start in 7th with Karro in 12th but Karro made a small mistake, dropping him down to 19th. Barragan was struggling with his lines and found himself going backwards, eventually finishing in 16th. Karro rode with his usual drive and determination and was rewarded with 12th.

Both Barragan and Karro decided to cut back across the pack on the start and make a dart to the inside of the first corner and it paid off as they both rounded the turn inside the top ten, however neither of them found their rhythm in the early laps and found themselves relegated to 14th and 16th by mid-race. They both settled down in the second half and clawed a few places back before the end, with Karro finishing in 13th and Barragan just behind in 14th. 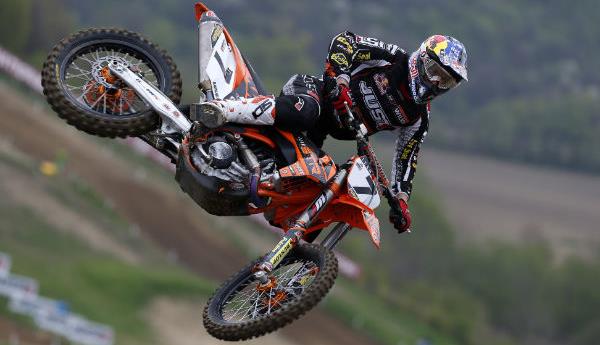 Both riders tried the same tactic at the start of race two but this time without the same success. Karro was in 14th position as he neared the end of the first lap but suddenly the bike stopped and his race was over, almost before it had begun. Barragan was down in 19th but soon pushed through to 16th, behind Leok. He tailed the Estonian for lap after lap until he was handed the position as Leok dropped his machine. Barragan pushed hard towards the end of the race and started to reel in Roelants in front but just ran out of time, bringing it home in 14th, for 14th overall. He therefore moves up one place in the championship and now sits in 17th place. Karro finished 16th overall and also moves up one place in the championship to 19th.

Barragan said: “I never really got into the groove today but I didn't give up and managed to make some passes and gain some valuable points. I’m still not where I want to be but I will keep working hard and hopefully have some good races in Portugal in two weeks’ time.”

Karro said: “I wasn’t so happy with my first race. I started well but I wasn’t relaxed enough and was riding too tight. I lost some positions on the first few laps but managed to settle into a decent pace in the middle of the race and hold onto 13th until the end. Can’t say much about the second race; the bike stopped and there was nothing left for me to do but go back to the truck.”

Team Manager, Steve Turner said: “Both riders found the track tough today. The surface was a lot harder than usual, making it very fast and not so technical. They both battled hard and scored good points and hopefully they will find the track in Portugal in two weeks’ time more to their liking and have some good results there.”