Torrid Time for Team in Portugal

Agueda, Portugal. 4 & 5 May 2013. The Team made the near 2000 km journey down to Agueda on the coast of Portugal for the sixth round of the World Championship and were greeted with beautiful weather conditions and a well prepped track on which to continue their quest for top ten honours.

Karro made a good jump and was inside the top ten as they rounded the first turn with Barragan in 16th, however Karro came together with Strijbos as they entered the whoops at the far end of the circuit and they both hit the deck. Barragan made up a few positions on the first lap to move into 13th. Karro came through in 22nd but looked keen to make amends and by the end of the second lap he was up to 16th. He charged through to 12th as he neared the end of lap five, but lost his rear end and went down for the second time. After dropping it again half way round the same lap he decided to pull off and save himself for race-day. Barragan had a relatively uneventful race, finishing where he had started in 13th.

With 94 entries, the line-up was split into two groups and after qualifying in 12th in group B on the previous day, Sterry had gate pick 21 on race day and was always going to be up against it off the start. He made a good jump out of the gate but on the over-watered start straight, he lost drive and was lucky to come out of the first turn in 21st. He made a couple of passes on the first few turns and finished the first lap in 19th. Although he wasn’t really riding in his usual smooth style, he still managed to hang onto the group in front, however on lap six he lost the front end and dropped down to 22nd and four laps later he dropped it again, losing a hatful of places to eventually finish in a disappointing 32nd.

Karro made a good start just outside the top ten but crashed with DeDycker on the second turn dropping him down to 20th, but he was soon up and running and actually finished the first lap in 16th. Barragan also crashed on the first lap and came round in a lowly 21st and struggled throughout to make any ground. Another crash made his task even harder and he was only able to get back to 18th by the finish. Karro made it through to 15th but a small crash halted his progress. He regrouped but had Leok on his tail and the two of them put in some impressive lap times as they battled for supremacy. Their pace took them through to 13th & 14th respectively and as they entered the penultimate lap there was less than a second between them. Leok managed to make a pass on Karro just before the end of the lap but the plucky Latvian wasn’t ready to settle for losing the place without a fight, however his determination was to be his downfall. As he landed off the jump onto the pit-lane straight the bike reared off to the left. As he tried to hang on he grabbed a handful of throttle and as the bike accelerated the back end stepped out and high-sided him over the bars with such force that it catapulted him straight over the perimeter fence, with his bike summersaulting behind. A shocked crowd looked on anxiously as he was attended to by the paramedics, before being transported off to the medical centre.

Barragan gated in 13th but lost two places on the first lap and was 15th as he crossed the line for the first time. He proceeded to spend the whole race chasing Factory Yamaha rider Joel  Roelants, a small crash on the third lap making his task harder. He managed to regroup and reel the Belgian in again but wasn’t able to get close enough to attempt a pass and had to settle for 15th.

Team Manager, Steve Turner commented: “I’ve had better weekends! Adam struggled to get to grips with the gnarly track but looked like he would still finish in the points until two crashes ruined his chances. Jonathan was off the pace all weekend and never looked like he would achieve the kind of results we know he is capable of and Matiss had one of the scariest crashes I have ever witnessed. Although he is battered and bruised all over, the only serious worry we have is with his left wrist, which is the one he broke in February. The results of an x-ray at the medical centre seem to confirm that it isn’t broken but he will go for a scan in Belgium to make sure. Although he won’t think so at the moment, he is actually very lucky to come away from a crash like that without sustaining serious injury.” 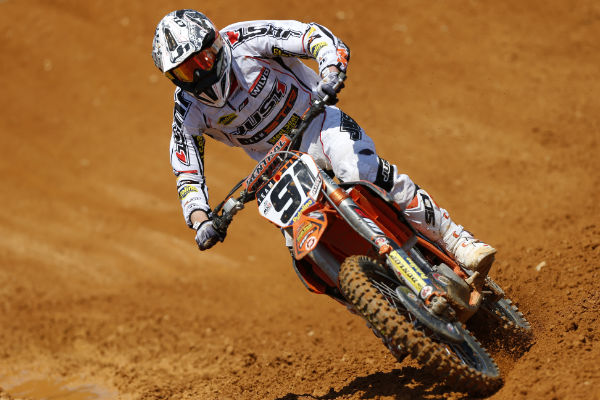