Erik Eggens of the JK SKS Gebben Racing Yamaha Team has scored a fourth position at round four of the Dutch Open MX2 Series in Rhenen last Thursday. The former Grand Prix winner had some bad luck in the first moto. He was riding in fourth position when he got a mechanical problem and was forced to retire from the race. In the second moto he took his revenge and finished the race in fourth position. Rick Folkers made a big crash in the first moto and hurt his knee, leg and ankle. After some painkillers he was able to race the second moto and crossed the finish line in eleventh position. Sven van de Mierden rode two solid motos and finished in sixteenth and seventeenth position in the motos. Simone Furlotti participated in this race to gain some experience. Simone did a great job and finished in eighteenth and sixteenth position in the motos.

Erik was motivated to do well in Rhenen. After his bad luck in Gemert he wanted to score as high as possible. In practice he found his rhythm straight away and set the second fastest time. Rick Folkers and Sven van de Mierden managed to put a fast lap together as well and ended the session in fourteenth and twentieth position. Simone Furlotti was riding this race to gain some experience of riding in the sand. Simone did several fast laps and finally set the 23rd fastest time.

In the first moto Erik took a really good start and was riding in fourth position in the beginning of the race. Unfortunately he got a mechanical problem and was forced to retire from the race. Rick took a good start in the first moto and was riding inside of the top ten when he made a big crash after a jump. Rick hurt his knee, leg and ankle and was in a lot of pain. Rick went back to the paddock and didn’t score points in the first moto. Sven took a not so good start and came out of the first lap in thirtieth position. Sven started a charge back through the field and came all the way back to sixteenth position. Simone finished inside of the points as well. He crossed the finish line in eighteenth position which was good for three points.

Erik was motivated to score a good result in the second moto. When the gate dropped he didn’t took a good start and came out of the first corner around tenth position. Erik was putting the pressure on the riders in front of him and in the middle of the race he had worked himself up into fifth position. Soon after he started to put the pressure on the fourth place rider. With still a few laps to go he took over this position and moved up into fourth position. The top three riders were already too far gone so Erik settled for fourth position in the second moto. Rick Folkers took his revenge as well in the second moto. With some painkillers he started the race around thirteenth position and managed to work himself up into eleventh position in the beginning of the race. Rick was riding a consistent race and crossed the finish line in eleventh position. Sven started the race just outside of the top twenty but was riding a strong race and managed to finish the race in seventeenth position. With this position he finished just one position behind his team mate Simone Furlotti. Simone took a really good start and came out of the first corner in fifteenth position. During the race he lost a few positions but after a well ridden race he crossed the finish line in sixteenth position. 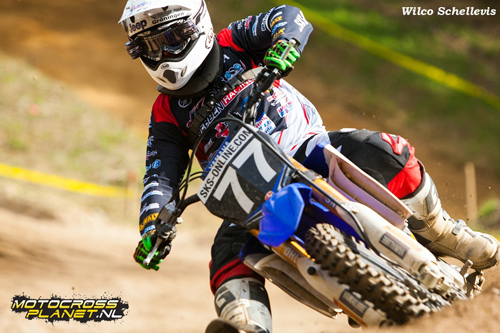