Uddevalla, Sweden, 29 – 30 June, 2013. After the improved performances at the last round in Italy, the team was in an optimistic mood as it arrived at the Uddevalla track in the west of Sweden. Together with Matiss Karro & Jonathan Barragan in MX1, it was also round three of the EMX250 Championship, giving youngster Adam Sterry another chance to experience the high level of competition which the series attracts.

Throughout Saturday, the heavens opened and drenched the track turning it into something resembling liquid concrete and making qualification somewhat of a lottery. Sterry went down on the first corner, which was not going to help his cause and after another crash later in proceedings, he was pulled in to save both himself and his machine more unnecessary punishment. This left him in the last chance qualification timed session. Although he posted lap times which put him in the top three, as the track dried out and his competitors times improved he was unable to put an error free lap together, leaving him in 7th as proceedings were brought to a close. With only four spots available this left him sitting on the sidelines as his rivals competed in the main race.

Things didn't improve for Sterry's teammates as they both crashed out of their qualifying race, leaving Karro with 29th gate pick and Barragan with 31st.

Karro made a great start from his poor gate choice and rounded the first turn in 13th. After losing out to Strijbos and Boog, he settled into 15th and after a mistake by Boog he was back up to 14th but as he defended the position from the Frenchman, he lost his front end, dropping him back into 15th. With a big gap in front and also behind he was left to stick with what he had and eased to the finish to take six more Championship points. Unlike Karro, Barragan made a poor start and was left buried in 25th and after moving through to 22nd he started to experience a problem with his rear brake and was forced to nurse it to the finish without making any improvement on his position.

Karro was away in 18th with Barragan in 21st and both riders pushed forward  with Karro improving to 16th and Barragan closing in on his teammate in 17th but a crash on lap 14 left Barragan to retire with the front end of his bike looking somewhat second-hand. After gaining two more places, Karro started to reel in his Baltic rival Tanel Leok and after setting his fastest laps of the race he moved onto the rear wheel of the Estonian as they approached the finish jump with two laps remaining, however Karro's foot was dragged off his footrest in one of the deep take-off ruts and he and his machine cleared the jump without being in contact with each other. As he hit the deck, a repeat of last year, when he suffered season-ending injuries at the very same track, it seemed a distinct possibility that history was repeating itself. Amazingly, however, he jumped to his feet, threw his leg over his twisted machine and proceeded to complete the last two laps without even losing any positions to finish in 14th, for 14th overall on the day.

Jonathan Barragan said: "What can I say, it was a bad weekend. I had a back brake problem in the first race and couldn't ride fast and in the second I rode well until I crashed, but by the time I got going again I was out of the points and the bike was twisted so there was no point carrying on."

Matiss Karro said: "I was happy with my riding; I am getting more and more confident. I think God was watching over me today when I had a big crash at the end of the second race and was able to get up without any injuries."

Adam Sterry said: "I had a bad qualifying race and missed out on automatic qualification and had to go in the last chance timed session. I was confident I could get into the top four but I didn't manage to put a fast enough lap in towards the end of the session when the track was drying out and the times were getting better."

Team Manager, Steve Turner concluded: "It was a tough weekend with all three riders suffering crashes which left the bikes in need of major repairs and to be honest, although I was in shock from the amount of carnage, I was so relieved that none of the riders were injured."

“Adam suffered from inexperience in the type of conditions he was forced to encounter in his qualifying race and Jonathan suffered more bad luck, especially crashing in the second race, just as he was looking like he would put together a strong performance."

“I nearly had a heart attack when Matiss binned it at the end of the second race and was amazed when he rode past the pits and waved to say he was okay. He rode really strong all weekend and was rewarded with two good finishes." 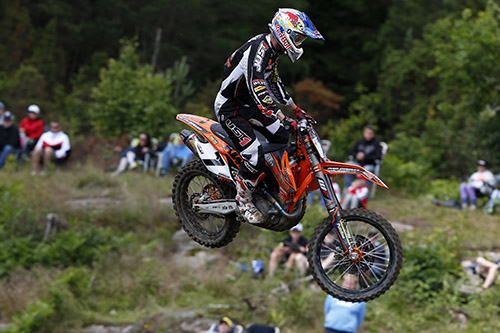