No reward for EAB Racing Team in Spain

EAB Racing Team rider Fabio Massei has crashed out of today’s European Superstock 1000 race while he was fighting for a podium finish. The Italian had a very good start from fifth on the grid at MotorLand Aragon and was in fourth position after the first hectic sprint to the first, tight left corner. Three laps later, when Massei was already in third, he had a real ding-dong battle with Ducati rider Ondrej Jezek and Lorenzo Savadori on the Kawasaki. Unfortunately, the fight ended for Massei with a huge high side in a very fast corner. The Italian escaped without serious injury, but his first race in the colours of EAB Racing Team on the Ducati 1199 Panigale R was over. 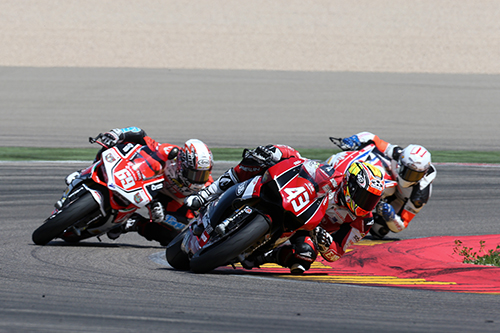 Fabio Massei: “It is a real shame what happened today after such a promising weekend. We have made a lot of progression and that’s really important. It shows that the potential is there and that is something to build on. Thanks to Ducati as well for their great support all weekend long. During the race, one of the other riders had a technical problem which caused some confusion for me and I lost some seconds. I tried to close the gap but lost the control of the bike at once. It was a massive crash and I’m very lucky to have only some pain in my back. I feel very sorry for the team as they did an amazing job. The next race is Assen, the home round of my team, hopefully we will have more luck over there.” 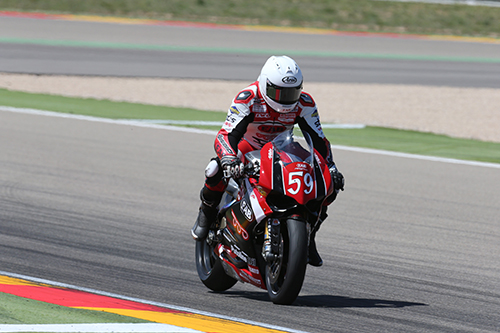 Alex Schacht made, like his team mate Massei, a lot of progression in Spain and was rewarded with one European Championship point. The Danish EAB Racing Team rider started his first Superstock 1000 race from seventeenth on the grid after two days of learning. In the first couple of laps it took Schacht some time to find his rhythm, but at the end he was able to overtook a couple of riders and finished a hard fought race in fifteenth.

Alex Schacht: “It’s limited what you can do from seventeenth on the grid, so I’m satisfied with one championship point. Today’s start was my first ever on the Ducati 1199 Panigale R. I still have to learn how to ride this bike really fast, but we have found a base to build on. Aragon is always a difficult circuit for me, so that doesn’t help either. The team did a great job and helped me a lot this weekend. Next up is Assen, a track that suits me much better. I’m really looking forward to fight for the points in the team’s home race.”