Fabio Massei has scored a hard-fought third place in today’s European Superstock 1000 race at Misano World Circuit – Marco Simoncelli. The EAB Racing Team rider started from the first row of the grid, but had to battle very hard in the sprint to the first tight and tricky corner section of the Misano track. As the race progressed the battle between Massei and both Barni Racing Team riders Leandro Mercado and Ondrej Jezek became more interesting lap by lap. But with four laps to go, the race was red flagged after a heavy crash of second place man Federico Sandi. Fortunately, Sandi escaped without serious injuries and was able to walk to the track side after some dizzy moments. Because of Sandi’s crash, Massei was promoted to third place and scored his second podium in a row after his second place at Autodromo Enzo e Dino Ferrari di Imola a month and a half ago. 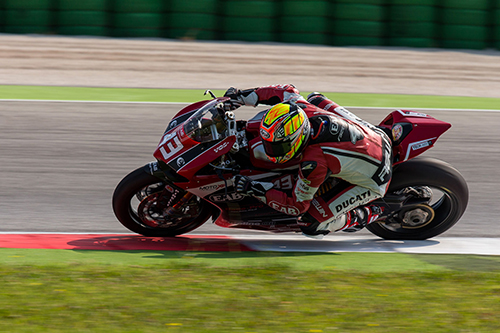 Fabio Massei: “It was a very hard race after a hard and difficult weekend. Misano isn’t one of my favourite circuits as it doesn’t suit my riding style very well. Also the weather conditions made it very hard. Unfortunately my start wasn’t good and I had to take some risk in the first laps. After that I tried to push as hard as I could, but at that moment Sandi crashed out and the race was stopped. Third place is not bad at all, but I still have the feeling that a better result would have been possible although it is of course still a very good result for the championship. The next race is at Portimão, a track that I really like. I will give the maximum again and hopefully we can fight for victory. My Ducati 1199 Panigale R was very good so many thanks to my team members.”

Alex Schacht ended in thirteenth position after a heroic race. The Danish EAB Racing Team rider injured his ankle during a running session earlier this weekend and was barely able to walk. Schacht had to start from 22nd after a hard qualification. 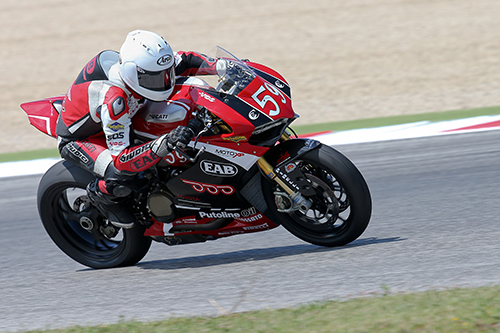 Alex Schacht: “This was one of the hardest races of my career, that’s for sure! Riding a Superbike in this heat with an injury makes live not easy… Because of my injury I just missed that small extra that you need in the European Superstock 1000 championship and that was a big shame. This morning I couldn’t expect that I would score points today, so we have to be satisfied with today’s performance. I’m really looking forward to Portimão and hopefully my ankle will be healed in two weeks time.”