Fabio Massei has scored a well-deserved fourth place in yesterday´s Superstock 1000 FIM Cup race at Jerez de la Frontera in the southern of Spain. The Italian started the race from the first row – third place on the grid - and was in second when the race was red-flagged because of a crash. One of the victims of this crash was EAB Racing Team newcomer Jed Metcher, who started the race from ninth of the grid in his very first weekend ever on the powerful EAB Racing Team Ducati 1199 Panigale R. The Australian rider replaced Danish Alex Schacht who decided to sit out the last two Superstock 1000 FIM Cup races of 2014.  Fortunately, Metcher escaped without serious injuries but his race was over. After the restart Massei just wasn´t able to maintain his performance from the first part and he had to be satisfied with fourth after a hard-fought race.

Fabio Massei: “To be honest, I’m disappointed about today. I started to win the race and in the first part I was very strong.  But the red flag changed everything… We lost grip lap by lap and it was difficult to stop the bike at the breaking point. Anyway, I want to say thank you to all my team members because we were fast all weekend long. I hope to score a good result in Magny-Cours and take a podium place in the final championship standing.”

Jed Metcher: “The weekend didn't end well but I learnt a lot about how to ride the Ducati. The crash was caused by a combination of the high track temperature and also from me pushing hard to make up positions at the start of the race. I have high expectations of myself so I believe if all goes well we can have a good result at Magny-Cours. The team has done a great job with helping me adjust to such a special motorbike. I want to thank all my supporters and the EAB Racing Team for their endless hard work to help me!” 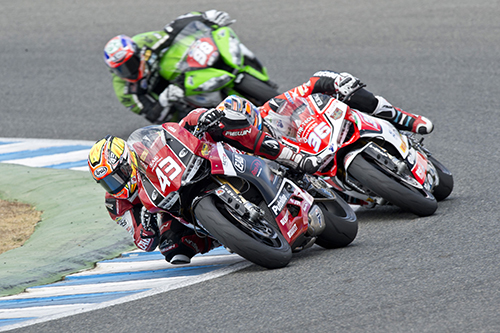